A Stranger Among the Same

The plane was filled with mostly Koreans and a few Americans (both black and white). As soon as I boarded, all announcements were in Korean first, English second. At first, I enjoyed hearing the novel sounds, but as time progressed, I became slightly irritated. 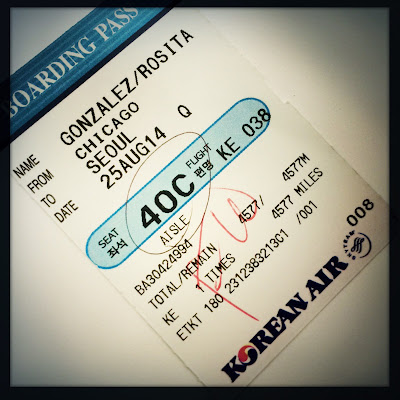 What a great lesson! Here I am viewing life through others’ senses! My privilege was showing. It felt strange to be the “last to know.” This strangeness shouldn’t be new to me. I have traveled to French, German, Polish and Spanish-speaking countries, but it was always evident that I was the foreigner.

On this flight, that was not the case. Passengers looked at me and smiled. I wondered what they were thinking. It was obvious to me that I was foreign to them. My dress, my complexion, my gait were all counter to the thin, pale crew.

I found it interesting that the members of the crew and passengers would first speak to me in Korean, but when I said, “Sorry … ” the knowing smile and then English.

From my economy seat, I didn’t at all feel the classism I have sensed on domestic and European flights. The crewmembers were kind and polite. I often felt I was being a bit too “American,” and was reminded of my Rwandan days when I would defend my country from the insults of a white South African.

In those days, when he described the wealthy, American tourists he encountered and how their entitled attitudes sickened him, I broke down in tears, and explained how my family members were not those kind of Americans.

The South African mocked me and ridiculed my tears with “How can you be so passionate about such a wealthy, selfish, racist country!”

America is the only home I have known. I cling to the things that validate my place in my country. But now, I shift to another loyalty, one that has waited far too long.

Posted by mothermade at 6:52 AM