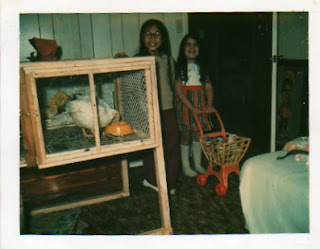 Thirty-six years ago today, my life changed. At the time, I was six and very angry about this change. I had been the apple of my parents’ eyes.

Wrapped in a blue-green receiving blanket, something wiggled. The thought of something so small and living excited me. So, I hurried to unwrap it. “Where is it?! Where is it?!” I kept saying. And soon, it emerged from all the layers … my new little sister.

Again, at first I was excited, then angry, then frustrated. She took a lot of my mother’s time and energy. I began packing paper bags to run away. But most times, I would make it to the end of the snow-lined walk and turn around, saying, “I’ll wait until the weather warms up.”

When my mother died, we found many things that she had saved. There were two letters in which I wrote that I wished she hadn’t adopted me. Angry children become cruel. I regret that. My sister was one of the best gifts my parents could have given me. It just took me a while to appreciate it.

My sister soon grew and began talking. Her name for me was a form of sister but came out “Titter.” Six-years is quite a gap. And often, we were worlds apart. But as we became adults, the gap decreased.

She is now my best friend. And her daughter has become my daughter’s substitute little sister with an age gap similar to my sister and me.

So, today, I honor that little baby that changed my life. She’s a fine woman and mother. And our mother would be mighty proud.
Posted by mothermade at 11:10 AM No comments:
Labels: adoption, Asian, biological child, Korean, Mothermade, nature, nurture, sister, Tennessee
Newer Posts Older Posts Home
Subscribe to: Posts (Atom)