Fairytales. Everyone has one. Mine has changed and morphed over time. In its current form, it haunts me.

During the last four years, mine has focused solely on developing my origin story. If you have followed me for a while, you know it has changed with every visit to Seoul.

This year, I invited you all on my journey via my facebook page. I posted live videos that show my raw emotions as I walked the streets that I now want to call home.

My trips to Seoul, always include a visit to my agency, Holt Korea. Every time, they reiterate that they only have my two sheets of paper. They tell me over and over that they have no record of my foster mother, and yet they send this to donors … 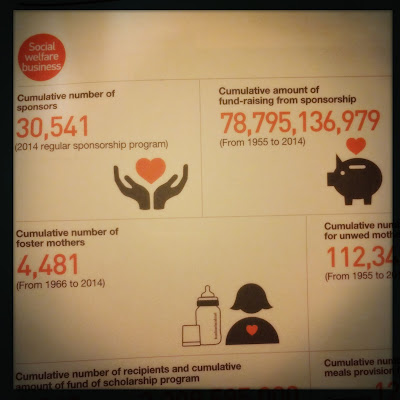 They boast 4,481 foster mothers since 1966, yet no record of mine. These donors are funding not only Holt Korea’s shiny multilevel building, but also the cost of placing their name on subway stop signs (at a cost of around $186,584 over three years). Enter our hotel, the Somerset Palace, one could find a collection box for my agency. 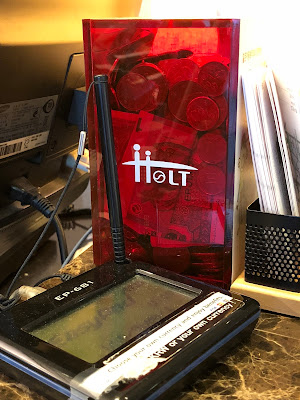 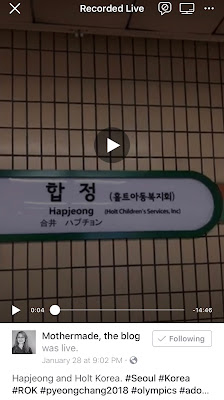 Now, I can no longer enjoy even a short visit. The reminders of the secrets that surround my beginnings are everywhere … hotels and Hapjeong Station. In all this time searching, the main emotion I have felt has been utter sorrow … perhaps the closest thing to Korean Han.

But my sadness is turning into something very destructive. The injustice of being denied my identity … well, it consumes me right now.

So, if you read my last post, you know I chose to stay in Seoul, baptizing myself in all that is Korean … the food, the drink and sparkling contact lenses.

My new eye color. Wicked. #eyecontacts #coloredcontacts #Korean #cutieeyes
A post shared by mothermade (@mothermade) on Feb 10, 2018 at 11:16am PST

After a little blooming jasmine tea and a massive waffle at The Nature Cafe (sheep cafe) near Hongik University, my friend and I walked up toward the university campus. Just up the hill, we found Cutie Eyes, a contact store. 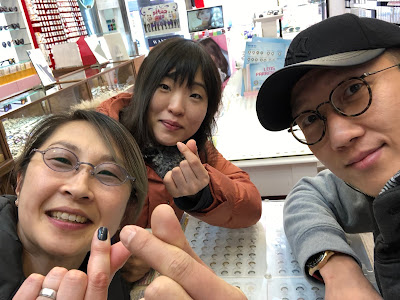 Once inside, I chose a few sets and as the owner accepted my credit card, he said, “Rosita Gonzalez?”

In the US, this is always followed by so much explanation. I did not anticipate this in Korea as I am often anonymous, safely blending in. I looked to my friend and asked, “Should I?” In a split second decision, I blurted out, “I am adopted.”

His face lit up. He said, “My older brother is adopted!” The other side of the fairytale unfolded … in Grimm style.

When his brother was four, his mother lost him in a train station; she was traveling with four small children. By the time they tracked him down, he had been sent to Belgium as a Holt adoptee.

Since that time, the family has queried Holt Korea for information. His mother is still stricken with grief of the loss of her son. He said his mother is getting older and would love the closure of seeing her lost son. Holt told the family that the adoptee was contacted and refused contact.

The shopkeeper, Bo Gyeol Kim, still searches via Facebook and other means to find his brother. He wants him to know that he has two older brothers and an older sister who also miss him and want to see him.

Bo Gyeol then asked me what I knew of my past. I showed him my photographs of my foster mother and me.

His words would change my fairytale …

“This is not your foster mother; this is your mother. You look just like her.”

All these years, I have stared at her photograph. Never did I see my own face looking back. How could I know? I was surrounded by faces they did not reflect mine. Now, I look at my past pictures, and I see her. This would also lend some truth to Holt Korea’s claim that they have no record of my foster mother.

Bo Gyeol has offered his help to try and garner attention to my search in South Korea. I am so thankful for this time and connection with him. He told me more … based on the photographs and the time (1968), my mother was well-off. She wore a ring and a watch. Photographs were hanging on the walls of the home. 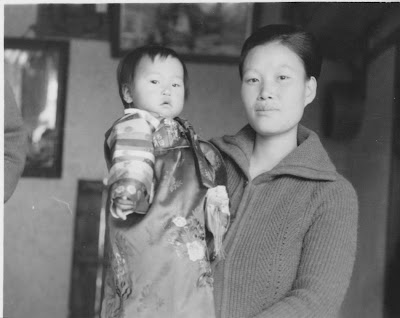 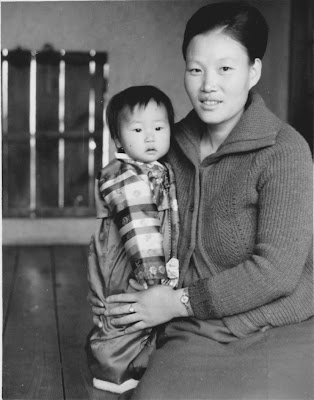 So, on this the US Seollol, I hold my hanbok, and I know she chose it for me. She wore hers to help me celebrate that very important birthday, the last we would spend together. Our happily ever after will be her touching this hanbok once more and allowing me to hold her as she so tenderly held me once. 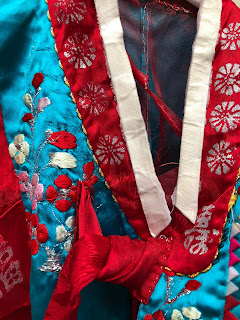 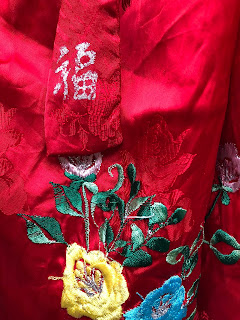 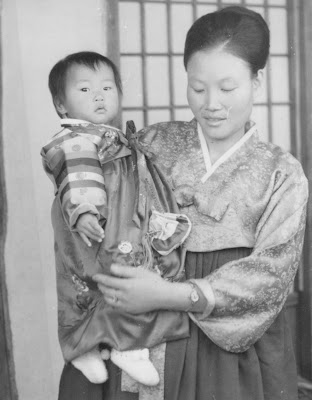 Posted by mothermade at 10:57 AM No comments:

Korea is my concubine.

Perfection. I spent my childhood building it. I built it shiny and covetable. I built it in my marriage and in my parenting skills … until I realized that when it encompassed others, I couldn’t control them.  My perfection began to erode my relationships.

From day one, I expected perfection from others because I had attained it through adversity as an adoptee. I wasn’t exactly calculated in my demands … it was just my normal.

As I began to learn more about myself, that ceramic, happy adoptee façade cracked and all my demons came spilling forth. After my first trip back to Seoul, I regressed. I slept in a deep depression. I came out the other side a very different person. The perfectionist died. But she still expected those around her to perform.

Often, I hear, “Why does everything come back to adoption? Do we have to talk about ‘adoption’ again?”

Honestly, I wish I could live a fairytale life in which I was born of a mother and father, and we lived out our lives as such, without questions about my past culture, the shame of not knowing my native language and the peace of just being me. But I was not dealt such a fate.

Loving me is very hard. I expect a lot. After 25 years, a couple is not the same two young hearts they once were. In my case, I am not the person my husband married, not even close. I am cheating on him, and Korea is my concubine. When she is absent, I still imagine her lying next to me, feeding me the fruits of her landscape. My thoughts of her interrupt my life and fill me with loneliness and sorrow. 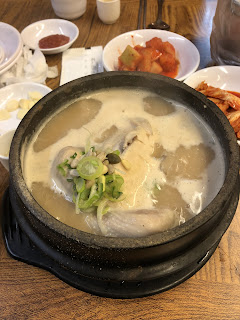 A couple of months ago, my husband excitedly planned a trip to Thailand (A country that is top on my bucket list.) with a Seoul weekend prelude. Initially, I was thrilled at the prospect of spending time alone with him in my home country and in Thailand. We haven’t had time to ourselves like that since having our first child in 2000.

When I land on South Korean soil, I find my feet firmly planted. I can feel the roots, once pulled, trying to re-root in the cracks of Korean pavement. My weedy self took hold this time and couldn’t be uprooted after my first full day back in Seoul. The thought of leaving without a thorough examination of my search … well … I just couldn’t leave. I broke down sobbing our second night. I begged to stay with my concubine. She was demanding that I not leave, not just yet. 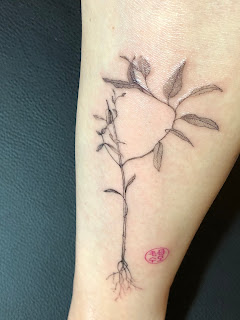 I cannot deny my guilt of having neglected her for more than 40 years. She gave me life, and I was ripped from her grasp. I am trying to make up for our lost time … at the expense of my marriage.

I carelessly changed my travel plans and took root at KoRoot, the adoptee guesthouse. This move was selfish. It was. I could only think of her … my concubine. She flooded my mind. 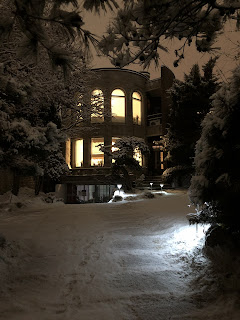 My decision hurt my husband. He has taken a lot from me in the last 25 years. He is my true love, but I abused his love. He wanted time with me, and I chose Korea.
Posted by mothermade at 8:40 AM No comments: