Sweaty palms, butterflies. It’s 1984. I am waiting for Mr. Anders, our biology teacher, to call out the first name. He always returned tests in the order of best grade to worst. I want so badly to be the first name. He says that the highest grade was a ninety-nine and a half. And then he says it … my name!

Elation is quickly replaced by personal disappointment at the small mistake I made that took that half point away. I’d studied. I took mental pictures of all the diagrams and my notes, but I missed that minute nuance.

Today, I read an article about Chinese mothers. Amy Chua has written a book about the parenting contrast between Eastern parents and Western parents. I find it all quite intriguing and am thankful for my Western upbringing.

But the most troubling part for me was identifying with the children and knowing the need to excel no matter what.  The need to have that perfect 100. I had that need, and it was not prompted by my Western parents. They were always full of praise.

Is the drive innate? My parents did not push me. But I pushed myself and see elements of it in my parenting of my children. Am I the Asian mother described by Chua?

I have wanted my children to take piano, but mainly because I was never afforded the opportunity. I allowed my son to quit at 7. My daughter now struggles, but I am holding steadfast in having her continue. I have watched silently as my son chose the violin for his strings class (then silently felt a victory).

Additionally, I have overreacted at lesser grades and bought workbooks for my children or designed homework when they didn’t have any. I want them to want what I so badly wanted at their age.

Now, I’m struggling. Is what I want bad for my children? Am I becoming the Asian mother? Is there a balance that meshes the best of both?

Welcome 2011! Although, I must admit that 2011 still feels like 1977. A few days before school let out, my daughter came home saying that she wished she could have “wide eyes.”

My heart contracted in anxious pain, and my mind went reeling back to 1977. Kids surrounded me as I tried to leave my new school in rural East Tennessee. Taller kids, big mocking faces and chants of “Me Chinese. Me play joke …”

Before we had children, my husband and I discussed my hometown and my childhood experiences. We decided that once we had children, we would only live in places that were ethnically diverse. Madison is just that. So, I found it quite shocking that we would be dealing with this issue here. 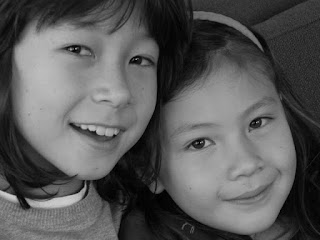 As I’ve posted before, my daughter is struggling with her own ethnic identity. Of our two children, she is the one who looks less Asian. When we asked her why she wanted “wider eyes,” her response was “Because then, I would be normal like my friends.”

“Normal” is a word that creeps into my blog often (Mistaken Identity). To hear my daughter say it, not only showed her painful need for acceptance, but also brought back my old, childhood insecurities.

As a parent, I want to protect her. But life is filled with the need to be accepted and the need to conform. So now, I must pull out my best mommy advice from my mother’s guide to life.