Living in Rwanda, my husband experienced something I had felt for a long time.

He could not hide the fact that he was different. When we were in the market, kids and adults would point and whisper (though he could hear), “Wazungu,” Kinyarwandan for “white person.” It was disconcerting.

As I have written, two Korean adoptee women have entered my life and are teaching me a little more about myself. They each adopted two Korean children, something for which I admire them deeply. In the process, one of them said her husband mentioned that the tables had been reversed once they visited Korea. In Korea, he couldn’t hide his race. His wife, on the other hand, could finally blend in.

I have spent a good portion of my life trying to blend in and secretly wishing to meet someone as confused by race as myself. On the one hand, I wanted to be seen as white or Puerto Rican. On the other hand, I wanted validation that being Asian was okay. As a teen in the 80s, I searched Teen magazine for Asian models. There were few, maybe one every few months in the Teen Model Search finalists.

TV gave me no respite. The media had few Asians other than Connie Chung, to whom I was often compared as I studied print journalism in the late 1980s, and Yoko Ono, to whom I was referred when I wore large sunglasses. At the time, I was trying to assimilate, and in my efforts to do so, I would often shun such comparisons.

Regretfully, I didn’t share this feeling of alienation with my parents. My mother sensed some of it, as she special ordered an Asian baby doll for me.

These experiences drive me today to create a better childhood for my own children. While they are mixed race, both Korean and Caucasian, they are often placed solely in the Asian category. My husband and I have sought to place them in racially diverse communities and schools. I’ve tried to make sure they see themselves as both races.

We own a fantastic book, Part Asian, 100% Hapa. In it, photographer, Kip Fulbeck, has photographed numerous subjects who are part Asian, from children to adults. My children pour over this book. It is worn from all the page turning and marking. It affirms them and assures them that they are not alone in their confusing ethnicity.

While I hated the references to Yoko as a teen, I relate to her now as a mother. Her son, Sean Lennon, has written the forward in Fulbeck’s book that addresses my children’s feelings.

Sean Lennon says, “It is only human to want to belong to a group. … If, like me, you are half-Japanese and half-English, you will in Japan be considered white, and in America be considered Asian. This can be lonely at times … ”

Yet, this book reassures my children that they are not alone in their feelings.  They are indeed Hapa!


“No one will date you because you’re mixed race.”

My heart sank this past week when my son told me someone had said this to him, but I hid my hurt.

I said, “Did you tell him, ‘That’s okay, because I won’t date racist people’?”

“No!  I never thought of that,” he replied excitedly, “That’s good.”

I explained I had many years of experience thinking of comebacks. Yet, this wasn’t the first time my son had experienced prejudice. At eight, he had his first bout with it as I described in this post. At the time, he didn’t seemed phased, but he admitted this week that he had held onto that memory as well.

As we talked further, he felt better. He realized that he was not alone, that his mother had grown up with the same, and that as author Eric Hoffer once said, “Rudeness is the weak man’s imitation of strength.”

I’ve spoken about some personal incidents of racism in this blog, but recently, I’ve been able to pinpoint some things for myself.

From the 1970s to the 1990s, my life was about assimilation. I wanted to be white. I wanted to blend in to the Appalachian human fabric and disappear. During those years in the South, those around me often reminded me that I was different, strange, or simply “not normal.”

My mother tried to console me when these things happened, but after time, I realized that she truly did not know how I felt. My father, on the other hand, did to some degree.  As a Puerto Rican whose English was heavily accented, he had endured his share of racism. We spoke some but rarely about it.

I have spent my life longing to “fit in” racially. In Virginia, I found my two closest friends, Katherine and Adrienne, strong Asian women. I have blogged on how they taught me a great deal about Asian culture, another crucial step in my development.

What they lacked was the experience of being raised in a family where one feels racially out of place. Enter my next step in development … meeting two adult contemporary Korean adoptees.

We are just learning more about one another. In the coming days, I hope to share with you the continuing maturation of the person I haven’t fully known … myself.
Posted by mothermade at 11:21 AM 4 comments:
Labels: acceptance, adoptee, bullying, development, family, fit in, growing up, Korean, maturation, Mothermade, parenthood, prejudice, Puerto Rican, racism, racist

White linen and the scent of comfort. That is how I remember my mother when I see this photograph.

I thought about this when I read an article today on the Huffington Post website. Find it here. While I am not adverse to having my photograph taken, I am often the photographer. So, the majority of our family photographs are of the kids, the cats and the chickens.

My husband is also frequently absent. We should change that. But in the meantime, for posterity I share this image of me and my peeps. 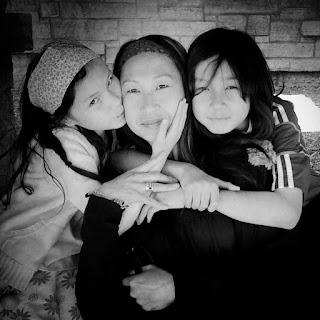 This was a memorable Mother’s Day a few years back. With full tummies, smiles and warm embraces, we sat for a quick photograph.  I love how our hands came together naturally. I hope my children look back on this image and remember that day at the Frank Lloyd Wright Cafe in Spring Green. It captured that fleeting moment before our lives went back into full gear, and we rushed off to the boy’s soccer match.

Time to stop and record. Make memories that bring back the scent of mothers and fathers.