A Day of Ups & Downs

The sun was shining today as I walked my daughter to school. She asked out of the blue, “Who do I look like? Some say I look more like Daddy, but I want to look more like you.”

I had to think about this a moment, then I said, “Why do you want to look more like me?”

Her reply? “I want to be more Asian, like brother.”

I reassured her that she and her brother were a beautiful mix of her father and me, and that she was Hapa, a very special mix. She skipped into school, seemingly happy.

After school, the kids and I ran errands and then chatted as we always do at dinner. I also noticed writing on my son’s arm. “What’s that, dude?” I asked. 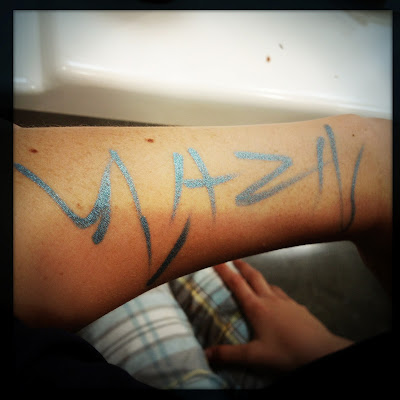 “What do you think it is?” he replied. “Think texting language.”

I looked at him puzzled.

“Geez Mom! Don’t you get it? WAZN. AZN is Asian. I’m WAsian, because I am white and Asian. Asian Pride!”

I was quite impressed by his pride in his race. Now, I was happy, just not skipping.

At bedtime, my daughter has been reading me a book she had chosen, The Lions of Little Rock by Kristin Levine. She had chosen this book because she wanted to know more about segregation in the late 1950s and early 1960s.

Tonight, the story entered the dark world of the KKK. One wife, who has been beaten by her husband, finds his white cloak in the closet. Threats are made on the women of the integrationist WEC (Women’s Emergency Committee to Open Our Schools). One letter says, “You and all the others who think like you should be tied to a car and dragged down Ninth Street, as did happen once before.”

From here, the 1927 story of John Carter, the last lynching in Little Rock, is told in some detail. I am sitting quietly as she reads this, not sure how she is taking it.

We finish the chapter, and I tuck her in bed. “Mom,” she begins, “The KKK hated lots of people who were different. Are they still around?”

I tell her yes but that they are the ones who now meet in secret and that they only protest. I try to assure her that the law protects us from them.

As I get prepared for tomorrow, a small shadow emerges. “Mom, I’m scared of the KKK. What if there are cloaks in the closet?” she asks.

I can only tell her that I will protect her and that I doubt there are KKK near us. It may be a restless night.