For me, that day was V-Day or VD. I celebrated it as a day to enjoy my independence from the vagaries of love [LUUUUUhV].

My mother saw it as a day to celebrate her role as a mother. Our 1993 Valentine’s Day was the last one we had before I found another love. She would always remember this day in the years to follow.

In those following Valentine’s Day phone calls she would say, “Remember our last Valentine’s Day alone?  We had drinks at Red Lobster and then moved on to the Spaghetti Warehouse. Remember?”

My response would be, “Yes, Mom.  I remember. You loved downtown Knoxville. It reminded you of your days as a single woman, right?”

“I loved that we were spending THAT night together,” she would reply with a little sadness in her voice.

In March of 1993, I found the man who insisted that he not complete me, but complement me. It was a whirlwind.

We dated and moved in together that following September, against my mother’s wishes. That Valentine’s Day in 1994 she would be despondent.

For my mother, I think she felt her love had been replaced. On outward appearances, yes. Deep inside though, I still loved my mother as strongly as I had that prior Valentine’s Day.

She would feel much better about this “replacement” when the man who had “taken” me “away from her” proposed in September of 1994. This became the point of healing.

She had a wedding to plan, but it was still extremely painful for her to let go of her first child. My mother was not shy about expressing her feelings … to me and my future husband.

I still see the mixture of pain and pride in her face in this photograph taken at our wedding (Image by Rob Heller). 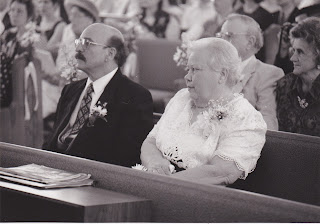 Someday, I will feel this pain in the same way. But for now, I enjoy the valentines my children give me and remember that evening so long ago at the Spaghetti Warehouse in Knoxville’s Old City.
Posted by mothermade at 1:30 PM
Labels: husband, love, mom, mother, Red Lobster, Spaghetti Factory, Valentine's Day, wedding