I am exhausted. The shutdown, the politics, the racists.

Our lives are consumed by the government shutdown. The man is growing his beard until he can go back to work. That makes me cranky. I can’t kiss that. 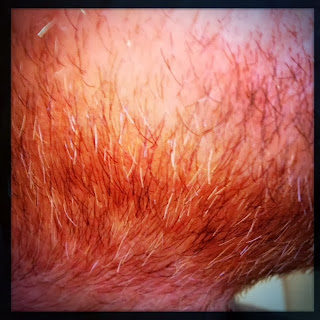 But back to my rant. The hardest part for me is the showing of the rebel flag. I grew up in the South where the rebel flag flies high and proud … bumper stickers, t-shirts, flags on the back of pick-up trucks. I moved to escape them and the constant ridicule they brought me. I moved to erase the feelings of fear.

Despite my move from the Deep South, I am reminded that the attitudes and pride in those attitudes still live on. Just this summer, as I was enjoying a outdoor, public dance, a woman stood with her back just feet from my face. Her shirt emblazoned with that familiar, fear-evoking flag. 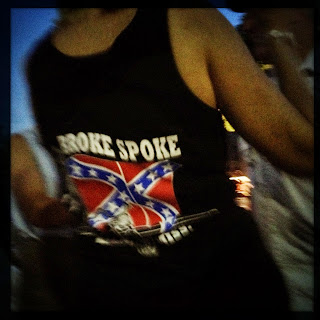 
“For those of you who would push back by saying we’re overreacting, that the Confederate flag is nothing more than a symbol of regional pride, save it. That flag you revere so much is no better than a Swastika, a threatening symbol of hate that has no place in American political discourse.”

The Politico, backs up this idea as it quotes Samuel Wurzelbacher, known as “Joe, the Plumber,” from an article he wrote. Wurzelbacher writes:

I interpret this to mean that if you are American, you want a president like you … white and male. This frightens me, that people in our country feel so strongly about this. That white equals American.

As a young Asian adoptee raised predominately by a white, Southern family, I once bought into that belief. I felt white, despite almost daily teasing that told me the truth … I was Asian.

I left the South almost twenty years ago. I love my Southern family and enjoy holidays where I can stay safely in the confines of my childhood home, but the moment we leave the house, the images from which I want to protect my children are everywhere. They are shocked at the sight of the flag. They know what it means, and I want to protect them from that gut-gripping fear I feel when I see it.

And yet, I cannot protect them. The divide in our country is emerging, and it is very much along the lines of race. I want to believe that the majority of Americans will soon see this divide and demand a reconciliation that respects our president because he was elected president, regardless of his race.