At thirteen, I sank into depression. I became a person no one would recognize today, and I wrote my mother letters that said, “I wish you had never adopted me.” Those words wounded her.

I wouldn’t understand or remember the wounds until the week after her death. Going through her things, my sister and I found one of my teenage-angst-ridden letters. This was the only negative letter amongst every letter I had ever written her, a drawer full of letters from my days in college to our days in Rwanda. Our last joyous days before I became a parent were also there captured in this photograph from her visit in 1998. 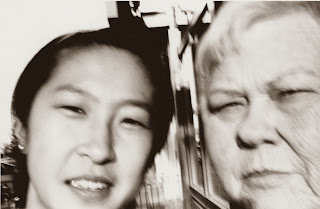 All my teenage anger is now coming to the surface as I have my own thirteen-year-old. He’s struggling with himself, and often his words cut me just as mine cut my mother some 33 years ago.

I am thankful for the friends who have supported me, but at times, it is hard. More seasoned parents will recall their troubles and say, “My mom was such a rock,” or “My mother was there to support me and show me the way.” Most do not know my personal struggles with the loss of my mother. I politely say “Thanks.” It is nice for those mothers and grandmothers to have that final realization that their job was done well in the end.

I wrestle with that. My mother didn’t have that realization, but I know she would have relished it. I am still on that rough road to finding the end … well-done.

Thank you for your blog!
My Mom would have been 70 tomorrow...she past away from pancreatic cancer in March of 2012-3 months after my son was born. I too am an adopted Korean and being a mother now makes me realize how much our mother's loved and wanted us so bad. Life's bittersweet...

Thanks so much for your note, Sofia. Life is indeed bittersweet, but that is what makes it worth living!