Children are not commodities … unless they are adoptees.

Today, this meme presented its horribly designed self: 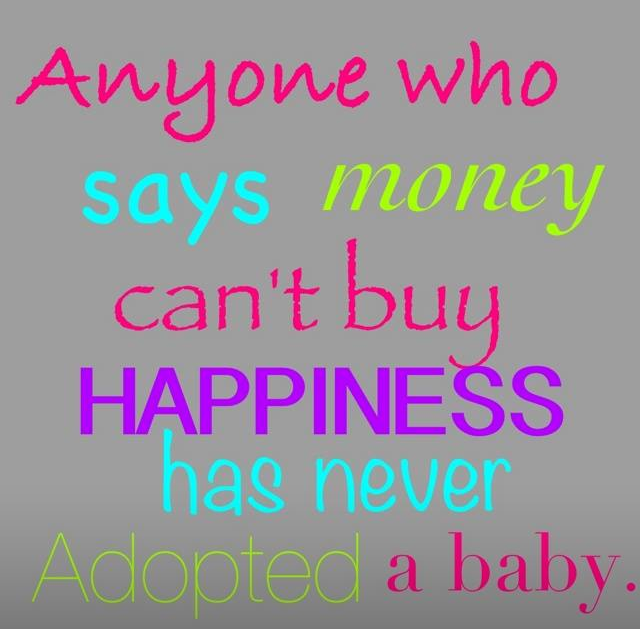 Anyone who has known me well-enough will know that on first-glance, I was sickened by the usage of type, lack of spacing, color and of course … Papyrus and Comic Sans. I like my life to be clean and concise. But I digress. [control]

The type wasn’t the reason someone posted this. The business of adoption is why people posted this. Look how the word “bought” could easily be substituted for the word “adopted.” The dialogue about this garnered everything from anger and disgust to explanations of how the agencies swindle people. Once again, my feelings on adoption as a business, international adoption and rehoming swelled, and my reaction was physical.

Since returning from KAAN, I cannot sit still without thinking about the experience, the speakers and the impact it had on me and my family. (Read this wonderful description of KAAN topics at Red Thread Broken.) One very important keynote, presented by Dr. Elizabeth Raleigh and titled “Is Asian Adoption Less of a Transracial Adoption? Racial Hierarchies in a Post-Racial World,” outlined her research based on interviews with adoption players, agency workers and social workers.

Some of her research quantifies the racial breakdowns of adoptions. What Dr. Raleigh saw in the data and confirmed by interviews with social workers is that there is a secretly spoken racial hierarchy which moves from an infant who is white (because the parents are white) to a multiracial (part white) child, to an Asian, a Hispanic and finally a black child.

Here are some of the shocking statements made by social workers to Dr. Raleigh:

“As I am sure you know, there are lots of stereotypes around Asians. Asians are preferable to African American or Latino. They are sort of lower down. There is a pecking order.”

“I would say maybe it goes white, Hispanic, maybe a variety of Asian cultures. And maybe kind of a big jump to maybe a more browner skin and Middle Eastern and Indian, and maybe another big jump and you get to black. I am not saying that’s ok but it is a pretty reasonably understood spectrum.”


I sat disgusted at the thought that adoptees were “chosen” like you would pick a sofa color. “Well, I want gray because it goes with my rug.”

To distance myself from these destructive feelings, I tried to step outside of my box. I understand full well a person’s need to see herself in another being. My own children have my physical features, some of my mannerisms and ultimately my genes; I find that very validating as a person who has lived isolated from those who resemble me.

So, in that sense, I see why a parent would request a child of the same race. Also, there are obviously challenges in adopting and guiding a child of another race, or my blog and others would not exist.

And yet … the cost of white babies exceeds the cost of black ones. Does no one see the ethical issues of assigning a market value to a human being? There is an obvious “supply and demand model” at work in adoption. Can happiness be bought? If it can, should it and how genuine is that happiness? And for whom is the happiness?

Our government regulates our food, our water, our education and our civil rights in order to keep us safe and healthy … but what about adoption? Aren’t the health and safety of children important?

Yes, everyone agrees that children deserve to feel loved and safe, and yet, we can talk about child adoptees in a way that whittles them down to dolls.

Very interesting to read your insights on adoption and how the adoption industry reflects society's hierarchical treatment of people based on physical characteristics, just like most industries. It is awful and unethical, I agree with you.

Thanks for reading, Jeanie. The more the public knows about adoption and race, the better our society can be. Information is power.

The best interests of children never come first in the societies we have created and live in. Adoption? Children are commodities and have been ever since the adoption industry came into being. It is wrong, unethical but part of the greedy need for money, profit and payment for everything.