This week, my father’s birthday came and went.

Birthdays, as you know, are very difficult for me. My birthday is a fabrication, a lie, a secret that only my original mother could reveal. 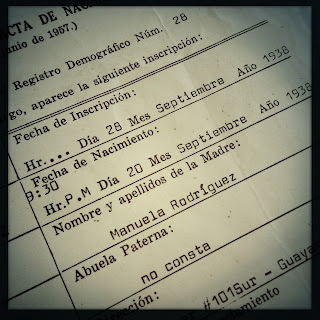 On the day my father was born, my grandfather was overjoyed, so much so he celebrated to utter inebriation. When he finally appeared to register my father’s birth at the town office, he gave the wrong date to the registrar.

My father honored his mother’s words and her story. He knew she would never forget the day he entered the world. His connection to her was sealed that very 21st of September. So, throughout my father’s life, he used September 21 as his birthdate.

This year, the sorrow of losing him mixed with the comfort of knowing him. His life was one of suffering, silliness and sweet moments with his family. I hope to have as many of those moments, whatever they hold, as he did.

As I walk the streets of Seoul, just as he did in 1965 and 1966, I think of him eating rice for breakfast and sweating as he ate kimchi.
Posted by mothermade at 10:16 PM
Labels: Abuelita, Abuelo, birth mother, birth story, birthdate, birthday, Daddy, father, original mother, sorrow